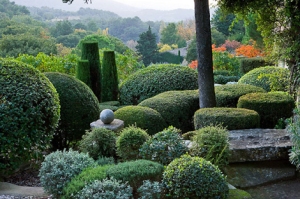 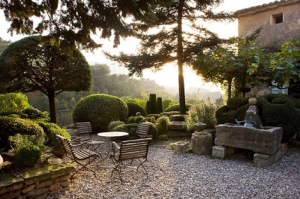 by Louisa Jones with photographs by Clive Nichols and Vincent Motte Actes Sud, 2012

Everyone has their list of favorite gardens that they have visited over the years. And most of us also have a wish list of gardens that we would like to visit someday. Sitting at the very top of my wish list for many years has been La Louve, the Provencal garden of Nicole de Vesian. I have collected many photos and magazine articles about this garden but the new book by Louisa Jones, with many of the photographs by Clive Nichols, is the first complete monograph to date on de Vesian’s contemporary masterpiece and probably the closest I will come to a real visit to this garden without actually hopping on a plane to France.

Nicole de Vesian (1916-1996) was a prominent fashion designer in Paris and New York. After her retirement at age 70, she turned her skills to the creation of several gardens in France. She purchased La Louve–a
ruin in the hilltop town of Bonnieux that was named after the last she-wolf seen in the Luberon region of Provence–in 1986, without ever having seen the inside of the house. At the time, Nicole was attracted more by the surrounding landscape, with all the interesting rocks and stones strewn about the property, than the architecture of the house. I suspect that her keen instincts as a designer told her that it would be a relatively easy job to reconstruct a house to her liking. Yet, to make a garden that would blend seamlessly with its surroundings would be a totally different matter; one that deserved some deliberation. The site was important. According to Louisa Jones… “In current jargon, [Nicole de Vesian’s] gardens were always ‘site-generated’ and ‘site-determined’, inspired by the character of each place, never the result of an abstract plan or some pre-established model to which everything was adjusted to fit.”

Posted on November 25, 2013 by regwickings
Posted in Uncategorized | Leave a comment